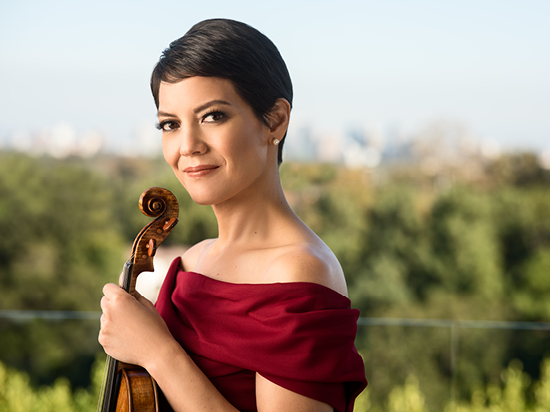 Anne Akiko Meyers is “a musical wizard, with astonishing access to every kind of expressive color” (The San Diego Union-Tribune) and has inspired many of today’s leading composers to create new violin repertoire for her.

She regularly performs around the world as soloist with leading orchestras, in recital, and is a prolific recording artist with over 40 recordings. A muse and champion of living composers, she recently premiered and performed Fandango by Arturo Márquez with Gustavo Dudamel and the Los Angeles Philharmonic at The Hollywood Bowl, Carnegie Hall, Walt Disney Hall, and the Auditorio Nacional in Mexico City, in addition to premiering Blue Electra by Michael Daugherty at The Kennedy Center with Gianandrea Noseda and the National Symphony Orchestra to massive critical and audience acclaim.

Anne recently released Shining Night and Mysterium and her 40+ recordings are a staple of streaming platforms and classical radio stations around the world. She has appeared twice on The Tonight Show, CBS Sunday Morning, Countdown with Keith Olbermann, Morning Edition, and Great Performances.

Anne was born in San Diego, studied at the Colburn School of Performing Arts and The Juilliard School on invitation by legendary teacher, Dorothy DeLay. She has received the Avery Fisher Career Grant, the Distinguished Alumna Award from the Colburn School of Music, and serves as a member of the
Board of Trustees of The Juilliard School. Anne performs on the Ex-Vieuxtemps Guarneri del Gesù, dated 1741, considered by many to be the finest sounding violin in existence and endorses Larsen Strings.