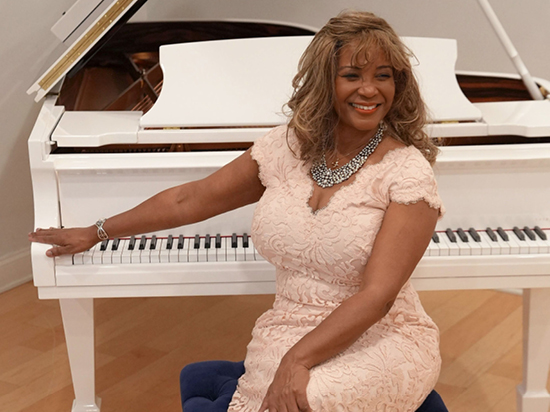 A native of New York, Concert Pianist Karen Walwyn made her New York solo piano debut at Merkin Hall as a follow-up to her two-album series for Albany Records entitled Dark Fires, offering premiere recordings of works by American composers of African descent. Bill Faucett from The American Record Guide said “ Walwyn's pianism is superb”, and Peter Burwasser from Fanfare Magazine said “Walwyn gets through this technically demanding program with aplomb. Her rhythmic nimbleness is especially notable.”

As a Champion of Florence Price,  Walwyn did the premiere performance of the Florence Price Piano Concerto in One Movement with the New Black Music Repertory Ensemble. Noted music critic, Bob McQuiston, wrote: “Walwyn provides a magnificent account of the concerto displaying her considerable technical skills” of the Albany Records album. A new premiere recording of the Concert in One Movement with the newly made available original score of Price was just released by the Arkansas Symphony Orchestra on April 3, 2022 with Ms. Walwyn as the soloist. Ms. Walwyn is in constant demand for her performances of the solo literature and concerto of Florence Price. As well she has been featured on NPR with John Banther, Washington, DC, and WDR3, Classic Forum, in Bonn, Germany with Wibke Gerking in addition to numerous interviews and lectures on the life and music by Florence Price.  On a recent recital at Florida International University, critic Laurence Budman wrote: “Walwyn provides a superb advocacy of Florence Price’s music.”

As a Composer, she received the Global Award: Gold Medal -Award of Excellence for her recording of her composition entitled Reflections on 9/11 . Robert Schulslaper of Fanfare Magazine wrote: “Imaginatively conceived and executed, it both disturbingly transposes the catastrophe into appropriately cataclysmic sound and artistically suggests the aftermath’s lingering sense of numbing devastation.” The demand for concerts of this seven-movement ‘tour de force’ continuously carries her across the nation for command performances, which was first premiered in full at the Kennedy Center in Washington, D.C. Her debut orchestral work will be performed this month, (March 2022) with the Walla Walla Symphony Orchestra.

Dr. Walwyn, Area Coordinator of Keyboard Studies at Howard University, is in constant concert demand nationally and internationally for both her repertoire from Frédéric Chopin to Florence
Price, as well as for performances of her own works. She was a student of Dr. James R. Floyd, Dr. Arthur Greene, Ms. Rosalie Gregory, and Ms. Susan Starr.