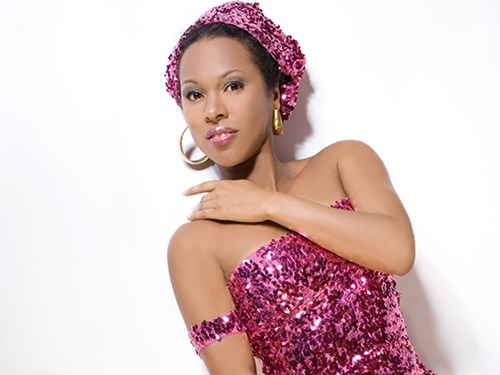 Spreading her “Joie De Vivre” with charm and generosity, Myra's voice touches the soul and the world is amazed.

Her intriguing personality and captivating artistry are as diverse as her origins. Living between New-York City and Hamburg (Germany), born and raised in Paris (France), with roots in Madagascar and Martinique, Myra is a real citizen of the world.

The multi-award singer-songwriter, instrumentalist, and producer, started her career in Paris where she studied piano, saxophone and dance at the Conservatory. Like many singers, Myra developed her singing and musical craft in church.

After several shows as a singer and Master of Ceremony in Disneyland Paris, she was invited to travel the world as a soloist with the Claude Bolling Jazz Big Band and the Orchestre National Symphonique De France.

Throughout the years, Myra shared the stage with superstars such as Mireille Matthieu, Johnny Hallyday, Céline Dion or Enrique Iglesias and performed in the presence of Quincy Jones in Davos (Switzerland) with her own choir Gospel Sans Frontières. She starred as the great Josephine Baker in the French movie “Les Enfants Du Pays" with Michel Serrault. In 2001 she left Paris to play the lead role of "Nala" in the Lion King Musical in Hamburg (Germany).

In addition to her success as a performer Myra is a highly sought after musical and vocal coach and workshop facilitator. She has led team building workshops for large multi-national corporations and smaller companies. In addition, she regularly donates and invests her time by singing in hospitals and prisons.

Myra’s international acclaim tremendously grew when she was invited to be the lead singer of the Opening Ceremony of the 2011 FIFA Women’s Soccer World Cup in Frankfurt, an event which had in excess of 130,000 spectators.

In 2014, she released her ﬁrst jazz album entitled "Salt - La Solution”, a project in collaboration with acclaimed producer, Lutz Krajenski.

Another major expansion of her international footprint took place when she was invited to be the headliner of the Eleuthera Jazz Festival (Bahamas) in 2015, 2017 and 2018.

From 2016 to 2019 : Myra starred in a series of tribute performances honoring the life and legacy of the legendary Whitney Houston. She was accompanied by the Leipzig Philharmonic Orchestra. (Germany)

In May 2019, one of her biggest dream came true when the Greenberg Artists and Schirmer Theatrical selected her in NYC to perform as a soloist for their new big production PROHIBITION.