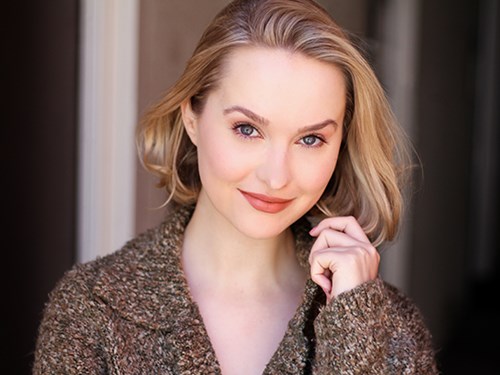 Madison Claire Parks is a Musical Theatre actress and singer most well-known for starring as Luisa in THE FANTASTICKS Off-Broadway at the Jerry Orbach Theatre in New York, for over 400 performances. Madison most recently completed her run as Laurey Williams in Rodgers & Hammerstein's OKLAHOMA! with North Shore Music Theatre in Beverly, Massachusetts. Prior to that Madison was back Off-Broadway staring as Katherine Talbot in Lerner and Loewe's rarely done musical: THE DAY BEFORE SPRING with The York Theatre Company. This was the first time the complete piece was done in New York since its original run on Broadway in 1943. Madison also recently starred as Nellie Forbush in Rodgers & Hammerstein's SOUTH PACIFIC, opposite Broadway's Ben Davis as Emile de Becque, at The Rubicon Theatre Company. Prior to that, Madison gained critical acclaim for her portrayal of Sarah Brown in GUYS & DOLLS with both Musical Theatre West at the Carpenter Center in Long Beach, California, and with Theatre Under The Stars at the Hobby Center in Houston, Texas. Other favorite roles include Cosette in LES MISÉRABLES, Hedy LaRue in HOW TO SUCCEED IN BUISNESS WITHOUT REALLY TRYING, Lady Larken in ONCE UPON A MATTRESS, Marsinah in KISMET, Precious in STEEL PIER, and Daisy Mae in the Los Angeles revival of LI’L ABNER. Madison has appeared as a soloist for numerous concerts throughout the country. Madison is a third generation performer. Her mother is Broadway actress, Karen Culliver, and her father is composer, Garrett Parks, son of Madison's grandmother; famous Broadway actress and MGM film star Betty Garrett, to whom she dedicates all her work and performances.