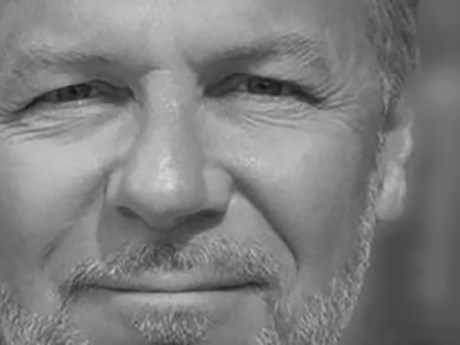 Brad Warnaar is a composer who has also been a professional French hornist for most of his career. Born and raised in Flint, Michigan into a musical family, he attended the Interlochen Arts Academy for three years, and then went on to the Eastman School of Music.

After his first year at Eastman, Brad auditioned for and won a position with the Rochester Philharmonic Orchestra. After three years there, he was invited by Karel Ančerl to join the Toronto Symphony Orchestra, a post he also held for three years. After leaving the TSO he remained in Toronto for another five years, performing frequently with the National Arts Centre Orchestra in Ottawa(with whom he performed the Hindemith Horn Concerto) and also playing regularly with the National Ballet of Canada. He had the privilege of joining Rob McConnell’s famed jazz band, “The Boss Brass”, with whom he made numerous recordings. Brad’s final stop in Canada before moving to California was with the Hamilton Philharmonic Orchestra, where he served as Principal Horn for three years(seems to be a magic number, doesn’t it?)

Soon after arriving in Los Angeles Brad Warnaar won an audition for a one-year position with the Los Angeles Chamber Orchestra, a group he continued to perform with for well over thirty years. He was concurrently a regular guest musician with the Los Angeles Philharmonic, with whom he played hundreds of concerts, recorded, and toured to New York and South America. Brad has played on well over 1,000 film scores and countless television episodes(he was a member of the orchestra for “The Simpsons” from its inception). He has recorded with top artists of every musical genre, from Rosemary Clooney, Barbra Streisand, and Celine Dion, to Paul McCartney, Willie Nelson, and Michael Jackson, to Metallica, Green Day, Lennie Kravitz, and John Legend. In the jazz world, he has recorded with Tony Bennett, Quincy Jones, Stan Getz, McCoy Tyner, Diana Krall, Wayne Shorter, and Diane Shuur, among many others. A true highlight of his career was recording and touring Japan with world- renowned jazz bassist, Jaco Pastorius.

Brad Warnaar has been in high demand as an orchestrator since his arrival in Los Angeles. Beginning in television, on shows such as “Dynasty”, “Falcon Crest”, “The Colbys”, and “Scarecrow and Mrs. King”, he soon moved up to the world of motion pictures. His first movie assignment was orchestrating marches for “The Right Stuff”, for which score composer Bill Conti received an Academy Award. With Michael Kamen, his work included “Robin Hood:Prince of Thieves”, “The Three Musketeers”, “101 Dalmatians”, and “X-Men”, among many others. He contributed orchestrations for many of Aaron Zigman’s scores, including “The Notebook”, “John Q”, and both of the “Sex and the City” films. Brad has orchestrated on more than thirty motion pictures for composer Brian Tyler, starting in 2005 with “Constantine” and including, most notably, five installments of the hugely popular “Fast and Furious” series. Other collaborations with Tyler have included “Battle Los Angeles”, “Avengers: Age of Ultron”, “Thor: the Dark World”, “The Mummy”, and “Crazy Rich Asians”.

Despite his demanding schedule of playing and orchestrating, Brad Warnaar has continued to compose music for the concert stage. In 2017, his Horn Concerto was performed and recorded by Giancarlo Guerrero and the Nashville Symphony Orchestra, with Leslie Norton as soloist. As a result of those performances, Brad was commissioned to compose a Cornet Concerto, which will have its premiere in March of 2022, again with Guerrero and the NSO, with José Sibaja as soloist. During the early days of the pandemic, Brad was moved to compose an orchestral piece, “when we return...” which was meant as a “greeting card” to all of his fellow musicians who were, at the time, facing great uncertainty about when it would be possible to get back to making music together again. He shared this piece with his colleagues, and many found it greatly reassuring. Also during this time he composed two works written in memory of lost friends - “Katia’s Tree”, for violin and chamber orchestra, and “Jiro”, for percussion soloist with string quartet. He is currently engaged in the composition of a symphony, subtitled “MMXX”, which also muses on that singular year in all of our lives, 2020.