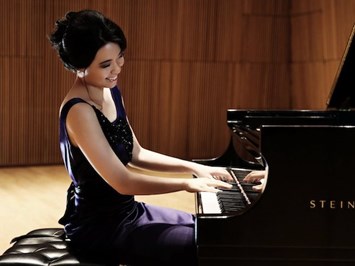 She first came to international attention in 2005 when she won the silver medal at the 12th Van Cliburn International Piano Competition. The youngest contestant at 19 years old, she took home two additional awards: Best Performance of Chamber Music (with the Takàcs Quartet), and Best Performance of a New Work. In 2006 Yang made her celebrated New York Philharmonic debut alongside Lorin Maazel at Avery Fisher Hall before joining the orchestra’s tour of Asia, making a triumphant return to her hometown of Seoul, South Korea. Yang’s subsequent appearances with the New York Philharmonic have included opening night of the 2008 Leonard Bernstein Festival – an appearance made at the request of Maazel in his final season as music director. The New York Times pronounced her performance in Bernstein’s The Age of Anxiety a “knockout.”

In the last decade, Yang has blossomed into an “astonishing artist” (Neue Zürcher Zeitung), showcasing her colorful musical personality in solo recitals and collaborations with the world’s top orchestras and chamber musicians through more than 1,000 debuts and re-engagements. She received the 2010 Avery Fisher Career Grant and earned her first Grammy nomination (Best Chamber Music/Small Ensemble Performance) for her recording of Franck, Kurtág, Previn & Schumann with violinist Augustin Hadelich. (“One can only sit in misty-eyed amazement at their insightful flair and spontaneity.” – The Strad)

In solo recital, Yang’s innovative program has been praised as “extraordinary” and “kaleidoscopic” (Los Angeles Times). She has performed at New York City’s Lincoln Center and Metropolitan Museum, the Kennedy Center in Washington, D.C., Chicago’s Symphony Hall and Zurich’s Tonhalle. In 2018, Musica Viva presented Yang in an extensive recital tour throughout Australia.

As an avid chamber musician, Yang has collaborated with many renowned string quartets, such as the Guarinari, Takács, Emerson, and the Pacifica String Quartets, and has fostered an enduring partnership with the Alexander String Quartet. After releasing two highly celebrated disc of Brahms and Schumann Quintets and the Mozart’s Piano Quartets (“by far, hands down and feet up, the most amazing performances of Mozart’s two piano quartets that have ever graced these ears” Fanfare Magazine), they completed a tour of North America in the 2018/2019 season performing Quintet with Pillars by Samuel Carl Adams, a newly commissioned work composed for the quartet and Yang to celebrate their 10 years of collaboration.

In 2019/2020, Yang shares her versatile repertoire in over 70 engagements throughout America and Australia. She appears as soloist with the St. Louis, Dallas, Phoenix, Milwaukee, Pacific, Fort Worth, Utah, Rhode Island, Minas Gerais, New World Symphony and Melbourne Symphony Orchestras among others and presents solo recitals in Boston (Celebrity Series), St. Paul (Chopin Society), and Rochester, NY (Eastman School of Music). As an advocate of new music, she will give a world premier performance with Kansas City Symphony in the fall of 2019 of Jonathan Leshnoff’s piano concerto written expressly for her.

Yang is passionate about promoting creative ways to introduce classical music to new audiences. She was the Guest Artistic Director for the 2019 Laguna Beach Music Festival in California, curating concerts that explore the “art-inspires-art” concept – highlighting the relationship between music, literature, and dance while simultaneously curating outreach activities to young students. This season, Yang continues her cross-disciplinary project with the Aspen Santa Fe Ballet with performances of Half/Cut/Split – a “witty, brilliant exploration of Robert Schumann’s Carnaval” (The Santa Fe New Mexican) choreographed by Jorma Elo – a marriage between music and dance to illuminate the ingenuity of Schumann’s musical language.

Born in 1986 in Seoul, South Korea, Yang received her first piano lesson from her aunt at the age of four. She quickly took to the instrument, which she received as a birthday present, and over the next few years won several national piano competitions in her native country. By the age of ten, she entered the School of Music at the Korea National University of Arts, and went on to make a number of concerto and recital appearances in Seoul and Daejeon. In 1997, Yang moved to the United States to begin studies at the pre-college division of The Juilliard School with Dr. Yoheved Kaplinsky. During her first year at Juilliard, Yang won the pre-college division Concerto Competition, resulting in a performance of Haydn’s Keyboard Concerto in D with the Juilliard Pre-College Chamber Orchestra. After winning the Philadelphia Orchestra’s Greenfield Student Competition, she performed Prokofiev’s Third Piano Concerto with that orchestra at just twelve years old. She graduated from Juilliard with the special honor of receiving the school’s 2010 Arthur Rubinstein Prize, and in 2011 she won its 30th Annual William A. Petschek Piano Recital Award.

Yang appears in the film In the Heart of Music, a documentary about the 2005 Van Cliburn International Piano Competition. She is a Steinway artist.