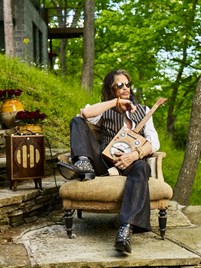 “Steven Tyler’s selection as this year’s Harmony Award winner is reflective of both the indelible impact he has had on music history, and his selfless efforts to enact positive social change and advocate for his fellow artists in the industry,” said Alan D. Valentine, Nashville Symphony president and CEO. “With a chart-topping album recorded right here in Nashville last year, Steven has made his own unique contribution to the historic Music City Sound, and we are delighted to honor him as an important part of our city’s vibrant musical community.”

With an illustrious career spanning five decades, Steven Tyler is firmly entrenched as one of the most iconic rock stars in history. A member of both the Rock and Roll Hall of Fame and the Songwriters Hall of Fame, he has sold more than 150 million albums as a solo artist and as lead singer of the legendary rock band Aerosmith, and he has won multiple GRAMMY® Awards, American Music Awards, BMI Awards and Billboard Music Awards, as well as an Emmy Award and ASCAP Founders Award.

Recorded in Nashville and featuring collaborations with some of the city’s leading songwriters, Tyler’s 2016 debut solo album, We’re All Somebody From Somewhere, reached No. 1 on the Billboard Top Country Albums Chart and No. 1 on the iTunes Top Country Albums charts in both the U.S. and Canada, and garnered rave reviews from the press and public.

The 2016 United Nations Humanitarian Award recipient, Tyler founded his philanthropic initiative Janie’s Fund (www.JaniesFund.org) in 2015 in partnership with Youth Villages to bring hope and healing to girls who have suffered the trauma of abuse and neglect. During its inaugural year, with the support of over 38 countries and many influential friends (including Bono, Garth Brooks, Zac Brown, Miley Cyrus, Sir Elton John, Pink, Ryan Seacrest, Britney Spears, Howard Stern, and Carrie Underwood), Janie’s Fund raised over $1.9 million. In October 2016, the first spend for Janie’s Fund was allocated to provide 300 girls with over 18,000 days of care throughout the next year.

As a member of the GRAMMY Creators’ Alliance, Tyler is also deeply involved in the fight to protect the rights of established and emerging songwriters, and he is also a tireless advocate for raising awareness of addiction issues and recovery solutions.

"Steven Tyler has been a part of my playlists before they were even called playlists, entertaining me at every party, cheering for me to work harder, motivating me to run faster and comforting me if I failed,” said Rosen. “He is more than just a music icon, he's a music god! I am thrilled to take part in honoring greatness!"

"Steven is the son of musicians. His mother was a piano player, his father a Juilliard educated pianist. Lucky for all of us a lot of his early childhood was spent in a fort under the grand piano while his father played the classics,” continued Bryant. “His songs are as beautifully crafted and iconic as his vocal runs. I can't be more excited that he has chosen Nashville as one of his favorite cities."

The Symphony Ball is Nashville’s premier winter social event and one of the Nashville Symphony’s two annual fundraisers. Since its inception in 1985, the Ball has raised more than $7 million for the Symphony, sustaining the organization’s mission of achieving excellence in musical performance and educational programs, while engaging the community, enriching audiences and shaping cultural life.