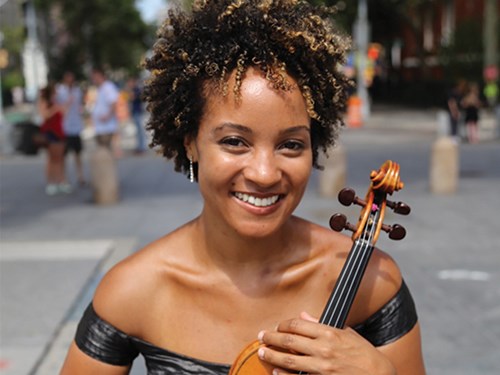 American violinist Melissa White has enchanted audiences around the world as both asoloist and a chamber musician. A first-prize laureate in the Sphinx Competition, Ms. Whitehas received critical acclaim for solo performances with such leading ensembles as theCleveland Orchestra, the Boston Pops, and the Atlanta, Baltimore, Colorado, Detroit, andPittsburgh symphony orchestras. Internationally, she has appeared as soloist with Poland’sFillharmonia Dolnoslaska; with the Colombian Youth Orchestra in a tour of that country; andas a recitalist in Baku, Azerbaijian.

In February 2020 Ms. White gave the Baltimore debut of Florence Price’s Concerto No.1 asa returning soloist with the National Philharmonic under Music Director Piotr Gajewski. ​TheWashington Post​ heralded, “White was an excellent advocate, prioritizing ease and fluencyover intensity, suiting the music’s lyric and episodic nature.” Her other recent orchestralactivity includes return engagements with the Lansing Symphony Orchestra and ChicagoSinfonietta, and debuts with the Monroe, Pasadena, Knox-Galesburg, and Johnson Citysymphony orchestras.

Ms. White is a founding member of New York-based Harlem Quartet, where since 2006 herpassion and artistry have contributed to performances that have been hailed for “bringing anew attitude to classical music, one that is fresh, bracing and intelligent” (​CincinnatiEnquirer​). The quartet is currently the Quartet-in-residence at the Royal College of Music inLondon and will begin a one-year visiting residency at Centre College in Danville, KY thisupcoming fall. Together with Harlem Quartet she has worked with such classical-musicluminaries as Itzhak Perlman, Ida Kavakian, Paul Katz, and Anthony McGill; appeared inmany of the country’s most prestigious venues, including Carnegie Hall, the White House,and the Kennedy Center; and performed in Europe, Africa, Japan, and the U.K.. ​In 2013 thequartet collaborated with jazz pianist Chick Corea in a Grammy-winning ​Hot House​ albumthat included Corea’s "Mozart Goes Dancing," which won a separate Grammy as BestInstrumental Composition.

A native of Michigan, Ms. White holds performance degrees from the Curtis Institute ofMusic and New England Conservatory, where her teachers included Jaime Laredo, IdaKavafian, Donald Weilerstein, and Miriam Fried. Her current instrument, “Matilda,” wascommissioned as part of a Sphinx MPower Artist Grant in 2014 by the American violinmaker Ryan Soltis.