About the Chef & Sommelier 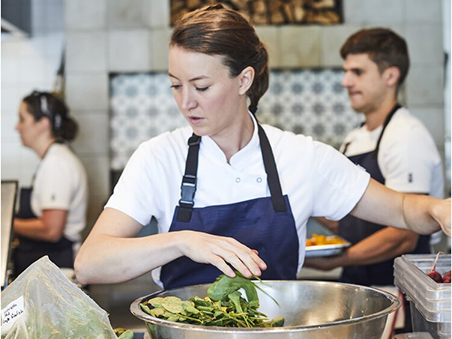 Julia Sullivan is the chef / co-owner of Henrietta Red in Nashville. Her passion for seasonal cooking is evident in her ingredient-driven menus and straightforward style, stemming from her early cooking in Nashville and New York. Julia strives to create memorable dining experiences by balancing complex flavors and elegant presentation with convivial spirit.

Born and raised in Nashville, Julia graduated from University School before attending Tulane University and The Culinary Institute of America. From there, Julia moved to New York and spent time in the kitchens of Blue Hill at Stone Barns, Per Se, and Franny’s.

In the fall of 2019, Julia launched The Party Line, a full-service catering business. The Party Line offers seasonal, contemporary menus that are customized to each client’s needs for a range of occasions, from corporate functions to weddings.

Since opening in 2017, Henrietta Red was named one of America’s 50 Best New Restaurants by Bon Appetit in 2017, one of GQ’s Best New Restaurants in America 2018, as well as being recognized as a 2018 James Beard Foundation Award semifinalist in the Best New Restaurant category. Additionally, Julia was named one of the Best Young Chefs in America by Robb Report, one of the Best New Chefs in 2018 by Food & Wine, and recognized as a 2019 semifinalist and a 2020 finalist in the James Beard Foundation Awards Best Chef: Southeast category.

Originally from a small farm in Iowa, Alex Burch joined the award-winning Bastion restaurant as wine director in November 2016. He moved to Nashville from Phoenix where he studied audio at the Conservatory of Recording Arts and Sciences. In Nashville, he was hired for an internship at Omni Sound Studios. With student loans on the horizon, Alex entered the restaurant industry. His career in the wine began while working at Nashville’s Kayne Prime for two years in the front of the house. While at Kayne Prime, Alex began joining blind tastings, eventually undergoing his introductory and certified exam with the Board of Master Sommeliers. He loves studying wine as it is a never-ending world entwined with history, culture and geography. His studies paid off as in the fall of 2019, Burch received his Advance Sommelier Certificate from the Board of Master Sommeliers. When talking about Bastion, he states, “People come in search of new food and new techniques…I’d like for people to approach beverages at Bastion in the same light. My goal is to create a beverage program that garners the same excitement and whimsy as the food.”