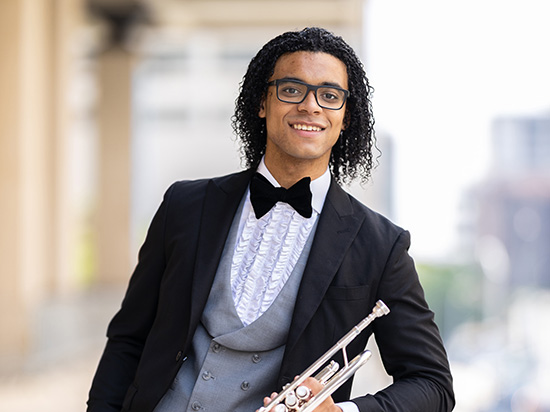 William Franklyn Leathers is a young and gifted musician at the forefront of dynamic trumpet performance. Born in Mississauga, Canada, the 21-year-old has been noted for “the sparkling clarity” of his trumpet solos and has performed across Canada, the U.S., the U.K., and the Caribbean, earning awards and accolades as he gained increased recognition.

Excelling at music from a very young age, Leathers won his first piano competition before his fifth birthday. At twelve years old, he became the youngest trumpeter accepted into both the Toronto Symphony Youth Orchestra and the Mississauga Symphony Youth Orchestra. As the fourth Canadian classical trumpeter to attend The Juilliard School, William is currently a protege of both Christopher Martin and Raymond Mase. His previous instructors include Howard Leathers, Dr. Chris Cigolea, James Thompson, and Guy Few.

William’s diverse capabilities have been widely recognized as he also serves as a substitute trumpeter for the New York City Ballet and as a substitute in the Broadway musical The Music Man. Additionally, as a member of the brass quintet, Brass22, William has performed with various Brass groups, including the American Brass Quintet, the New York Philharmonic Holiday Brass, and the Rodney Marsalis Philadelphia Big Brass.

Currently in the last year of his undergrad at Juilliard, William exhibits a steadfast dedication to both his academic and musical excellence in his role as student ambassador. These efforts have been recognized and further rewarded as Leathers is a proud recipient of a Kovner Fellowship, the inaugural Fendi Vanguard Award, and a 2021 Sylva Gelber Music Foundation Award. Leathers’ commitment to furthering his musical education continues as he has also been accepted into the accelerated BM/ MM program at The Juilliard School.

William is a member of 2022 The National Brass Ensemble, which is comprised of the finest brass players in major orchestras across the United States. A major highlight of Leathers’ career thus far is his recent appointment as principal trumpet of the Nashville Symphony, following a successful blind audition in February 2022.