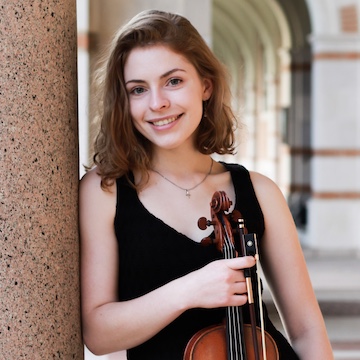 Lucia Nowik, originally from New Jersey, began studying the violin when she was four years old. She holds a Bachelor of Music from the Juilliard School, and completed her Master’s Degree at Rice University’s Shepherd School of Music, where she was a student of Kathleen Winkler. Her former teachers also include Masao Kawasaki and Stephen Clapp. Lucia has served as both concertmaster and principal for the Tanglewood Music Center and Music Academy of the West. She has also attended the Schleswig-Holstein Musik Festival and Spoleto Festival USA. In addition to her orchestral experience, she has performed in chamber and solo settings with artists such as Robert DeMaine, Richard O’Neill, Karen Dreyfus, and Renee Fleming. Prior to joining the Nashville Symphony in 2022, Lucia was a substitute violinist with the Baltimore Symphony, the New Jersey Symphony, and the Louisiana Philharmonic. She has many interests outside of music, including fitness, fly fishing, and baking desserts.