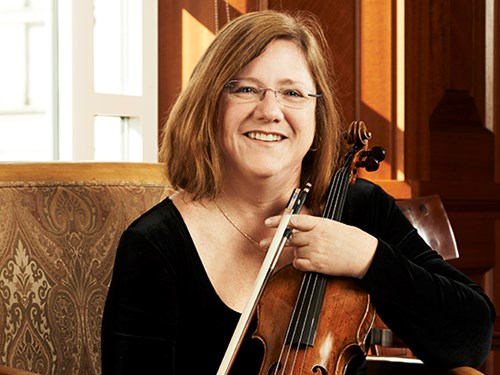 Laura Ross has been a member of the Nashville Symphony’s violin section since 1984. Prior to moving to Nashville, she was a member of the Windsor Symphony (1975-77), the Ann Arbor Chamber Orchestra (Principal Second Violin, 1980-82), the Flint Symphony (1979-82) and the Toledo Symphony (1982-84). Laura was raised in Royal Oak, Michigan, and holds both a Bachelor of Music and a Master of Music from the University of Michigan-Ann Arbor, where she studied with Angel Reyes.

Laura has been Nashville Symphony Union Steward since 1995. Since 2000, she has been a member of the Executive Board of the Nashville Association of Musicians, Local 257 AFM, and also serves as one of Local 257’s AFM Convention Delegates.

On a national level, Laura has served as the Secretary of the International Conference of Symphony and Opera Musicians (ICSOM), which represents the top 51 orchestras in the U.S. and Puerto Rico, since 2002. She previously served the Regional Orchestra Players’ Association (ROPA) as Member-at-Large from 1991-94 and as ROPA Secretary from 1994-2000. She has served as a member of the ROPA and ICSOM Electronic Media Committees since 1989 and has negotiated numerous national symphonic recording agreements, including the Symphony, Opera, Ballet agreements covering Audio-Internet, Audio-Visual, Live Recording and the Integrated Media Agreement — all used by the Nashville Symphony.

In August 2010, Laura was appointed to serve as a union trustee on the American Federation of Musicians and Employers’ Pension Fund (AFM-EPF), the pension plan in which NSO musicians participate.