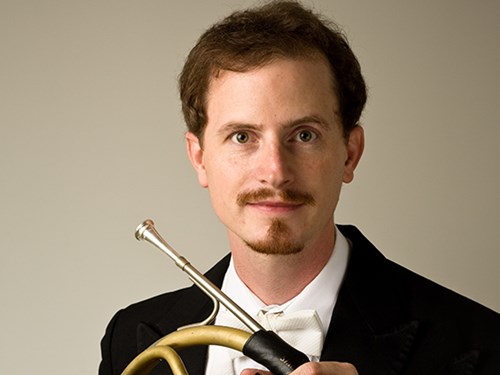 Hunter Sholar grew up in Roanoke Rapids, a very small town in North Carolina that had a magnificent band program. He began his professional career by playing extra horn with the North Carolina Symphony during his senior year of high school while studying with Andrew McAfee and Kimberly Van Pelt. In 1999, he graduated with a bachelor’s degree in music from Northwestern University, where he studied with Gail Williams, Bill Barnewitz, Norman Schweikert and Barry Benjamin. While still a junior at Northwestern, Hunter joined the Fort Wayne Philharmonic as Fourth Horn, a position he held for two years. Following this appointment, he served a number of one-year positions with various orchestras, starting with three years with the Saint Louis Symphony. Other temporary positions include The Florida Orchestra and the Honolulu Symphony Orchestra. Hunter joined the Nashville Symphony Orchestra as Fourth Horn in 2007. He also is a member of the Santa Fe Opera, where he plays Second Horn in the summer. Hunter has also been a member of the Grand Teton Music Festival, the Colorado Music Festival and the Oregon Mozart Players and has played extra horn with the Cincinnati Symphony Orchestra, the North Carolina Symphony, the Kansas City Symphony, the Oregon Symphony, the Sarasota Orchestra (formerly the Florida West Coast Symphony), the Chicago Chamber Musicians and Kansas City Summerfest. He has been a featured soloist with the North Carolina Symphony twice, performing Strauss’s First Horn Concerto and Mozart’s Third Horn Concerto. In his spare time he enjoys hiking and backpacking, ultimate Frisbee, reading, biking, gardening, Scrabble and running.