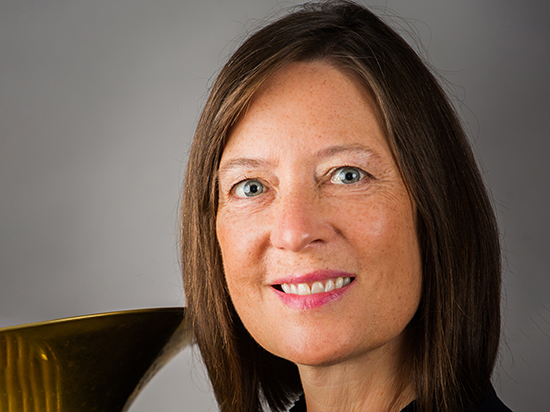 Hometown: Mystic, Connecticut
Member of the Nashville Symphony since 1990

What drew you to the horn as a young musician?
My mother chose the horn for me. She was a music major in college and played the oboe. She decided that the horn was a great opportunity to do something different from every other kid in the ensemble who was playing clarinet or trumpet, and she was wise to know that it got some great lines.

What’s it like to learn the horn?
It does have a reputation for being a difficult instrument. Of course, all instruments are difficult. What’s difficult about the horn is that everyone knows when you’ve had a bad day and you’ve missed a note. Maybe the flute will have a bad day and be a little bit sloppy in a run, or a violinist might have a little intonation issue. But we miss a note, and the whole world knows.

So as a child, learning the French horn, that also meant learning to have a tough outer skin. When you’ve missed a note, it’s really hard to keep your head up and keep on going. So it’s been a journey. But when it sounds good, the horn is just the greatest instrument out there. We’ve got soaring lines. We’ve got romance. We’ve got adventure. We’ve got melancholy. We’ve got all the colors. We get a lot of glory, and it’s a lot of fun.

Who’s had the greatest influence on you as a musician?
I’m a great lover of many art forms. I dabbled in painting. I dabbled in dancing. And some of my favorite people out there are not necessarily orchestral musicians. Joni Mitchell is the most incredible artist because she does it all. She writes poetry, she paints, and then the music she writes — she pulls it all together. And she is seemingly unconcerned about what other people think about her. She’s been a muse to me from early on for all of those reasons.

There are so many people. My husband, Chris Norton, is an incredible musician, and meticulous and detailed. He’s influenced me greatly in his work ethic and how he goes about being a better performer.

What has been the highlight of your time in the orchestra?
It’s been really rewarding starting when the orchestra was small in scope and watching it become a really great performing ensemble in a beautiful hall with a good conductor. We’ve put all the pieces together over the years, and watching it grow from year to year has been really exciting for me. Of course, it’s been exciting going to Carnegie Hall and being proud of what we’ve done there.

Some of the other highlights have been the operas that we used to do. Kenneth Schermerhorn conducting Rosenkavalier was amazing. Playing Salome, or even before that, Britten’s Turn of the Screw, where I was so moved by what was going on with the drama. I always love it when we get to do things with other genres.

What’s the most unusual thing that’s happened to you onstage?
I think we were playing a Paganini violin concerto back in TPAC, and this enormous walking stick climbed right up my mute. It’s doing this thing with its antennae, and we’re trying to be respectful of the performance, but this bug was just doing this crazy dance on my mute. The violin concerto ended, and the bug climbed back off of the mute and went on its way, and we just laughed. The story did not end well because one of the trumpet players came over with his size 14 shoe, and that was the end of that poor walking stick.

How has teaching influenced you as a musician?
The more I work on being a good teacher, the more I feel grounded in my own playing and about music in general. I’m thinking through things more, because I have to explain them to students who are depending on me to help them. So through the years of teaching, I feel like I’ve become a more grounded musician. And then when students inspire me by doing things that I might not have thought of, I see a different side of a musical performance. It’s been a very deep and growing experience for me.

What is it about the horn that makes it so perfect for movie scores?
It’s so versatile, and it captures that heroic quality more often than any other instrument. And what’s popular on the movie screen are all these swashbuckling, adventurous movies — Star Wars and Star Trek and Crocodile Dundee and Air Force One. But then, the horn can turn around and show such great sadness in its color and its voice. It’s more like the human voice than any other instrument, except maybe the cello. And then, when you put eight horns together, there’s no stopping that sweep we can capture when we all play together.

Favorite composer?
My favorite composer is usually the one I’m working on. So today, it’s Prokofiev, but I happen to think he’s incredible and wonderful and awesome, and I have trouble getting through Romeo and Juliet without crying during some of those scenes.

Favorite piece of music?
Same answer — whatever I’m working on — but Romeo and Juliet is pretty high up there on the list.

Favorite venue other than the Schermerhorn?
Last year, I finally got to the Berlin Philharmonie. That was pretty amazing. It was one of the most spectacular places I’ve ever heard live music.

Favorite horn player?
Gosh, there are so many great players out there. I’ve really loved listening to Andrew Bain in the L.A. Philharmonic, and I heard Abel Pereira in the National Symphony recently. He sounds spectacular. They’re wonderful players, wonderful people.

Favorite movie?
I love humor, I love romance. My Big Fat Greek Wedding is so much fun. And back when Roxanne came out a thousand years ago, I loved everything about that movie.

Favorite book?
Louis de Bernières’ Captain Corelli’s Mandolin. I bought that book for Kenneth Schermerhorn, and he died a few weeks later, so I don’t think he ever read it. It’s set in World War II, and the protagonist is an Italian sergeant who doesn’t want to be in the army. He corrals all of his ranks, and they sing Italian opera, and it made me think so much of Kenneth Schermerhorn being in the army that I thought he would enjoy it.

Favorite place to go in Nashville?
I love Percy Warner Park and would get out there every day if I could. It’s beautiful.

Favorite thing about the Nashville Symphony?
I think this is one of the nicest orchestras that I could ever hope to be in. The people are supportive and kind and try really hard, and therefore we make really good music together.