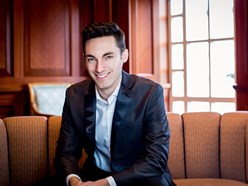 Nashville, Tenn. (August 30, 2018) – The Nashville Symphony has announced a one-year contract extension for Assistant Conductor Enrico Lopez-Yañez, which will run through the duration of the 2018/19 concert season.

Lopez-Yañez was appointed Assistant Conductor last September, arriving in Music City following two years at the Omaha Symphony. Over the past season, he has expertly led the orchestra in Pops, Jazz and Family series concerts, as well as special events, the summer Community Concert series and the Fourth of July celebration at Ascend Amphitheater.

“Enrico established an incredible connection with our audience from the very start, and that has only grown stronger with every performance he has led over the past year,” said Giancarlo Guerrero, Nashville Symphony Music Director. “With his versatility, energy and genuine commitment to music education, Enrico has contributed tremendously to our orchestra and our community, and we are pleased that Nashville audiences of all ages will continue to enjoy concerts with this talented conductor.”

“I am thrilled to be returning for another year with the fantastic musicians and staff of the Nashville Symphony, and feel fortunate to have the opportunity to collaborate with so many talented musicians on such a diverse range of programming,” said Lopez-Yañez. “Our upcoming season is full of exciting programs, and I look forward to conducting Pops concerts featuring Martina McBride and the music of John Williams, along with Family Series performances, Young People’s Concerts and more."

Lopez-Yañez previously held the position of Assistant Conductor with the Omaha Symphony, and he received a Master’s in Music from the University of Maryland and a Master’s in Music and his Baccalaureate from UCLA.  He served as Assistant Conductor to Christoph Eschenbach and Valeri Gergiev for the National Youth Orchestra’s 2016 Carnegie Hall, New York state and European tour performances. During the 2018/19 season, Lopez-Yañez will make appearances with the Detroit Symphony, Sarasota Orchestra, Oklahoma City Philharmonic and Symphony NH, as well as return appearances with the Rochester Philharmonic and Omaha Symphony. His full bio is available online here.