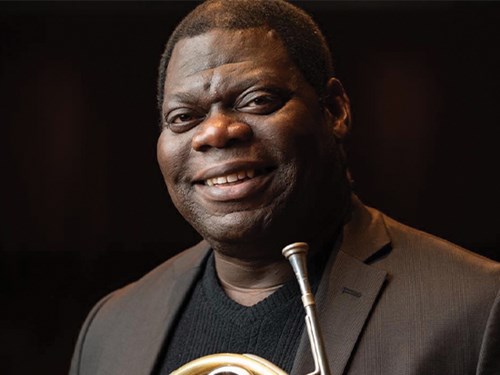 A native of Queens, NY, Jeff Scott started the French horn at age 14, receiving an anonymous gift scholarship attend the Brooklyn College Preparatory Division. An even greater gift came from his first teacher, Carolyn Clark, who taught the young Mr. Scott for free during his high school years, giving him the opportunity to study music when resources were not available. He received his bachelor's degree from Manhattan School of Music (studying with David Jolley), and master's degree from SUNY at Stony Brook (studying with William Purvis). He later continued his horn studies with Scott Brubaker and the late Jerome Ashby. Mr. Scott's performance credits are many and varied. They include The Lion King orchestra (on Broadway, New York) 1997-2005, and the 1994 revival of Showboat 1994-1997. He has been a member of the Alvin Ailey and Dance Theater of Harlem orchestras since 1995 and has performed numerous times under the direction of Wynton Marsalis with the Lincoln Center Jazz Orchestra. Mr. Scott is also the french hornist in the internationally acclaimed wind quintet “Imani Winds”.

Mr. Scott has also experienced good fortune as a studio musician. He can be heard on movie soundtracks scored by Terrence Blanchard, Hans Zimmer and Tan Dun and on commercial recordings with notable artists such as Chick Corea, Wayne Shorter, Chris Brubeck, Chico O'Farill, Robin Eubanks, Freddy Cole and Jimmy Heath, among others. Additionally, he has toured with artists such as Barbra Streisand and the late Luther Vandross.

Mr. Scott's arranging and composing credits are many, and include scoring the off-Broadway production of Becoming Something, The Canada Lee Story, the staged production of Josephine Baker: A Life of Le Jazz Hot!, and many original works for chamber orchestra, chorus, solo winds as well as wind, brass and jazz ensembles. His works are published by International Opus, Trevco Music, To The Fore Music and self-published at Music by Jeff Scott.

Mr. Scott has served as horn faculty for the music department at Montclair State University (New Jersey) 2002-2020, Mannes School of Music@ The New School 2016-2020 and was recently appointed Associate Professor of Horn at Oberlin College and Conservatory.