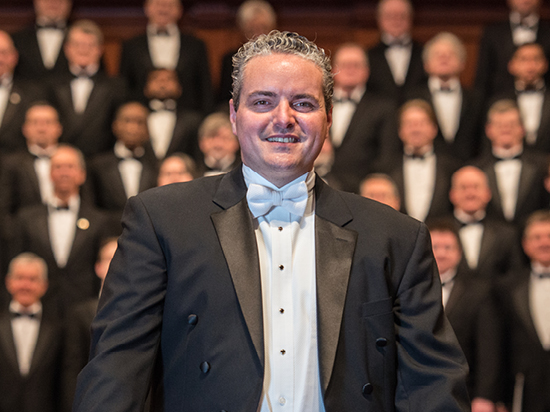 Now entering his sixth season as director of the Nashville Symphony Chorus, Dr. Tucker Biddlecombe has raised the bar of excellence for Nashville’s premier choral ensemble through intense musical preparation, diverse programming, and community-building. During his tenure the chorus has expanded to 160 singers and toured the Czech Republic in 2019 performing Orff’s Carmina Burana at Smetana Hall in Prague. He also serves as Associate Professor and Director of Choral Studies at Vanderbilt University’s Blair School of Music, where he directs the Vanderbilt Chorale, the Vanderbilt Glee Club, and teaches courses in choral conducting and coordinates the Blair-to-Peabody music teacher education program.

Biddlecombe’s work with the Nashville Symphony has included chorus preparation for many of the repertoire’s most notable masterworks. Notable performances have included Beethoven’s Symphony No. 9, Bernstein “Kaddish” Symphony No. 3, Haydn Creation, Verdi Requiem, Mahler Symphony No. 2, and the annual performance of Handel’s Messiah. His first assignment upon appointment in 2016 was chorus preparation for the NSO’s world-premiere recording of John Harbison’s Requiem (Naxos) and is excited to once again record in 2022 with the chorus on Gabriela Lena Frank’s Conquest Requiem. He annually conducts the orchestra and chorus in performance during the Voices of Spring concert.

A passionate advocate of music education and a veteran teacher, Biddlecombe is active in public school music programs in Nashville and serves as President of the Tennessee Chapter of the American Choral Director’s Association. In 2019 he completed a residency with the Central Conservatory in Beijing, China, where he was honored to work with student and professional choral educators. He is in demand as a conductor and clinician, having served as a clinician to choirs in 25 states, and has conducted all-state choruses in Alabama, Arkansas, Florida and New York. Biddlecombe made his Carnegie Hall debut in 2019 conducting Morten Lauridsen’s Lux Aeterna.

A native of Buffalo, New York, Biddlecombe is a graduate of SUNY Potsdam and Florida State University, where he completed doctoral studies in choral conducting and music education with Dan Gordon and André Thomas, respectively. He resides in Nashville with his wife Mary Biddlecombe, Artistic Director of the Blair Children’s Chorus.