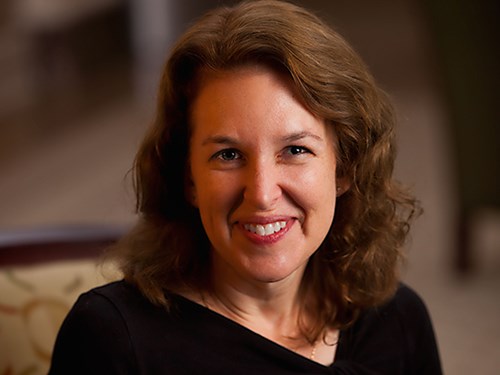 Hometown: Indianapolis, Indiana
Member of the Nashville Symphony since 1998

Principal harpist Licia Jaskunas joined The Nashville Symphony in 1998. Previously, she was harpist with the New World Symphony in Miami, Florida, and with the Utah Festival Opera Company. Additionally, she has performed at festivals in Tanglewood, Massachusetts; Sapporo, Japan; Spoleto, Italy; Charleston, South Carolina; and Aspen, Colorado. Licia received her Bachelor of Art degree and Performer's Certificate in harp from Indiana University; she also holds a Master of Art degree from the Eastman School of Music. In addition to performing with the Nashville Symphony, Licia currently teaches privately and at Belmont University.

What inspired you to become a musician, and why did you choose the harp?
The harp was a natural choice for me, because my mother was an amateur harpist (and vocalist), and I grew up with the instrument in my home. My mother's harp had been purchased used by my grandmother, who was not a musician but always wanted her daughter to play the harp. I began lessons when I was big enough to handle the instrument, which was around age 8.

I was a typical young music student who disliked practicing, until my family moved to Bloomington, Indiana, home of famed Indiana University's Jacobs School of Music, where I was greatly inspired by two of the best harp pedagogues in the world and by the wonderful community of harpists whom they attracted to the university.

I was very moved by classical music from a young age, but having excellent training and guidance and also a natural persistence gave me the confidence to pursue a profession in music.

What are the unique challenges and opportunities of performing your instrument?
The harp is a gratifying instrument to learn, because it provides a nice sound even to a beginner. However, it is quite a chore to keep a harp in tune, to change strings, and of course to move the instrument. Ensemble opportunities aren't often available, because most schools lack a full orchestra.

At an advanced level, performing on the harp can be very treacherous, due to the number of pedal changes necessary to produce sharp and flat pitches (the equivalent of black-key notes on the piano). With 7 pedals and 3 notches for each, the harp requires a great deal of blind foot work.

Another challenge harpists face is that of making unplayable parts playable. Many great composers, such as Richard Strauss and Richard Wagner, were unaware of several physical differences between playing the harp vs. the piano — for example, harpists use four fingers per hand, rather than five.

There is a huge tradition of editing amongst harpists. Even the famous cadenza from the Waltz of the Flowers is not ever played as written by Tchaikovsky.

Challenges aside, the harp can produce more “colors” than any other single orchestral instrument. Because of its unique, warm sound, it can have a soothing effect on the listener. And it is versatile, because an accompanist is unnecessary for solo performance.

Which composers write the best music for your instrument?
Some composers who have made especially good use of the harp include Ravel, Debussy, Puccini, Mahler, Stravinsky, and Ginastera. In addition to using the harp in symphonic works, Ravel, Debussy, and Ginastera also wrote solo works that are staples of the harp repertoire. Ravel learned a great deal about the instrument when he was commissioned to compose a piece to show off the first "double-action" (pedal) harps made in 1810.

If given the chance to program an orchestra concert, which works would you select?
I would love for the orchestra to do a concert version of an opera such as Salome or Der Rosenkavalier, both by Richard Strauss. Either would be spectacular in our hall.

Do you have favorite pieces that you’ve performed with the Nashville Symphony?
There have been so many! Every performance of a Mahler symphony that we have done has been a thrill. It is wonderful to have a seat onstage during a performance of Mahler. I also enjoyed performing and recording Ravel's little-known opera L'Enfant et les sortilèges. It was very exciting to perform Ginastera's Concerto for Harp several years ago; I was grateful for the opportunity to showcase the harp with such an amazing piece.

What do you like about living in Nashville, and what are your favorite things to do here?
I love that Nashville has a unique history and character. In what other U.S. city can you meet so many people in the music business on a routine basis? The amount of talent here is mind-boggling. And I love the vibrancy of downtown Nashville. There is always a lot going on when I come in to work on concert nights.

I have three school-aged children, so most of my time off is spent on family-related activities, such as public-school events and community sports. My family loves the public library and the beautiful parks in and around Nashville.

If you had the chance to meet any composer, living or dead, who would it be?
Mozart. I'd love to know what he was really like, and I'd love to hear him perform his own music.

What was the first concert you ever attended?
The first concert that I remember was a harp ensemble recital at the University of Wisconsin, after which my mother asked if I would like to play the harp.

If you could go anywhere in the world, where would it be?
I'd love to take my family to the Galapagos Islands.