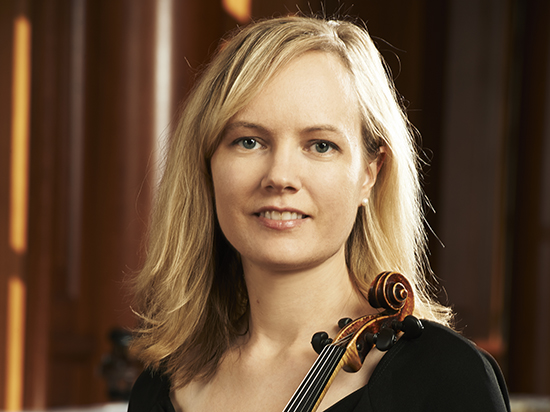 Hometown: Fargo, N.D.
Member of the Nashville Symphony since 1997

What inspired you to become a musician – and what drew you to the violin?
When I was about 4 years old, I had a friend who played the violin, and her mom was my babysitter. My friend was a little older than me, and I’d go to some of her lessons from time to time, and her accomplishments on the violin really inspired me to learn it myself. Her teacher taught the Suzuki method, where a student starts out with a Cracker Jack box as a violin before graduating to a real instrument. Soon I had my own Cracker Jack-box violin and was learning to play too. I attended many symphony and recital performances in Fargo as a child as well, so I was familiar with hearing the instrument.

My parents were both classically trained musicians and music instructors — my mom played trumpet and my dad played French horn — and they wanted me to pursue music as well. They retired here in Nashville, so they’ve both seen me play quite a bit.

Who has had the greatest influence on you as a musician, and what have you learned from them?
I would say my father. I distinctly remember him playing Mussorgsky’s Pictures at an Exhibition on a record player for me when I was about 6 or 7. He would describe each picture/portion of the piece as it was playing and draw sketches as well, which really brought the music to life. His sketch of the “Oxen Cart” in particular stands out — it was very lifelike to me and helped teach me the emotional side of music for the first time.

What’s your earliest musical memory?
I don’t recall how old I was, but that would definitely be hearing my mom practicing trumpet at home. She used these Vincent Chicowitz warm-up exercises, and I must have heard those thousands of times!

What goes through your head just moments before a concert begins?
I always like to scan the audience to see who we are going to be performing for that evening. Sometimes I notice audience members I have seen before at other concerts, but you also see some interesting things from time to time. We were playing The Planets once, and I noticed someone in the crowd wearing what I can only describe as a “space hat.” Another time, I saw an Abraham Lincoln impersonator in the audience when we were doing a piece on Lincoln.

Beyond that, though, I’m usually just focused on the music and going over the important parts in my head one last time.

If you were given the chance to program an orchestra concert, which works would you select for the performance?
Grieg’s Holberg Suite (for string orchestra), Mozart’s Piano Concerto No. 22 and Rachmaninoff’s Third Symphony.

What’s been the highlight of your time performing with the Nashville Symphony?
Both of our trips to Carnegie Hall really stand out to me. That first appearance, I felt like we as an orchestra had really accomplished something very meaningful, and we were all so excited to be there. Luckily, we had a few stops on the tour before getting to Carnegie, so I wasn’t as nervous as I might have been if it had been the first night of the tour.

Our first gala performance in the Schermerhorn in 2006 was also exciting. It was unbelievably wonderful to begin playing in our new hall and a great evening to celebrate the orchestra.

What part of town do you live in?
Old Hickory – I just moved there about a year ago from Hermitage because I wanted to be closer to my daughter’s school.

Is your daughter musical as well?
Yes, she plays the flute in her school band and has played recorder in some of her classes as well. She also likes the trombone and piano, and enjoys creating her own melodies on both of them at home after school.

What are the biggest changes you’ve seen in Nashville in your time here?
Nashville is a very exciting place to live right now. Neighborhoods are being improved, and there are so many more choices with where to eat and what to do around town. I can remember going to Centennial Park on a Sunday evening shortly after I’d moved here from Chicago in 1997, looking down the streets toward the Capitol and thinking everything is as still as a picture, completely empty. Though I love the way the city is developing, there’s a part of that calm that I miss sometimes.

What do you do when you’re not busy performing, rehearsing or parenting?
I have been active fostering dogs through a local rescue organization for about five years. I’ve probably fostered about 10 dogs over the years, hosting them at my home while they’re waiting to be adopted. I have two Jack Russell terriers of my own, Harriet & Daisy, who are both 12 years old, and they always help me out with the dogs I rescue, “showing them the ropes” and teaching them things before they move on. It’s a little sad when a dog I’m fostering has to leave, but at the same time, that means they’ve found a forever home and that makes me very happy.

What are some of your favorite spots in Nashville?
I love the Frist Center. I like to take my daughter to their ArtQuest space for kids on the top floor. I also love the Nashville Zoo and anywhere there is a hiking trail. The Treehouse, McNamara’s and Loveless Café are some of my favorite restaurants in town.

If you hadn’t become a musician, what career would you have chosen?
Probably either a writer or something involving TV or film production. I could see myself working on documentaries about music or something historical, like World War II.

Do you enjoy listening to music when you’re not performing?
I generally like upbeat tunes from the ’60s, ’70s or ’80s. I don’t listen to that much classical music, though there are some classical recordings that I will listen to from time to time, and others that I study when I’m preparing a piece to play.

Do you have a guilty pleasure?
Nutella and dark chocolate!

Do you have a favorite movie?
One of my favorite movies of all time is Amadeus. I first saw it when I was a kid shortly after visiting Germany and Austria with my family. It really made an impression on me musically, especially after just having seen the places Mozart had lived.

Who has been your favorite visiting artist to perform with?
Luciano Pavarotti. He was someone I grew up listening to, and I was so excited to be in the orchestra when he performed at what is now Bridgestone Arena. I’ll always remember him riding around backstage on his little scooter quietly singing an aria before the show.