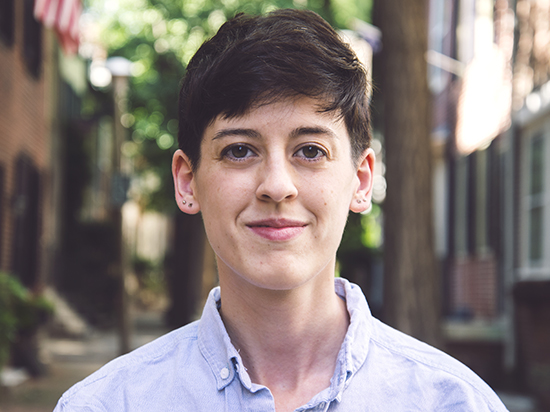 Emily Cooley is a Philadelphia-based composer of orchestral, chamber and vocal music described as “dramatic, forceful and filled with reverberation” (Sioux City Journal) and “a journey using multiple tonalities but ever-evolving styles...with a beautiful delicacy” (Vermont Today).
​
Emily's orchestral works have been performed by the Minnesota, Louisville, Milwaukee, Berkeley, Sioux City and Eastern Connecticut symphony orchestras; the Cabrillo Festival Orchestra; and numerous university orchestras. She has been a fellow at Minnesota Orchestra Composer Institute, Norfolk New Music Workshop, CULTIVATE at Copland House, and Cabrillo Conductors/Composers Workshop, and she was honored with a Charles Ives Scholarship from the American Academy of Arts and Letters in 2015.

A native of Milwaukee, Wisconsin, she is a graduate of Curtis Institute of Music, USC and Yale. In 2012, she co-founded Kettle Corn New Music, a presenting organization in New York City, and currently serves as its director of publicity. Emily is also a Community Artist Fellow at the Curtis Institute, where she designs collaborative music programming for Philadelphians who are incarcerated or returning citizens.

Argo is a meditation on change. In ancient mythology, the Argonauts gradually replaced every part of their ship, the Argo, resulting in an entirely new ship, still named Argo. Many have pondered the ramifications of this story; namely, whether something can remain the same when all its parts are replaced. I have thought about this as a metaphor for change in people, in relationships and in communities.

Musically, the piece is led by the low strings. Their opening melody — two G's sinking down to an F — pervades the whole piece, appearing in many guises. I've been drawn to this simple musical gesture, and it is the origin of many of the piece's ideas. 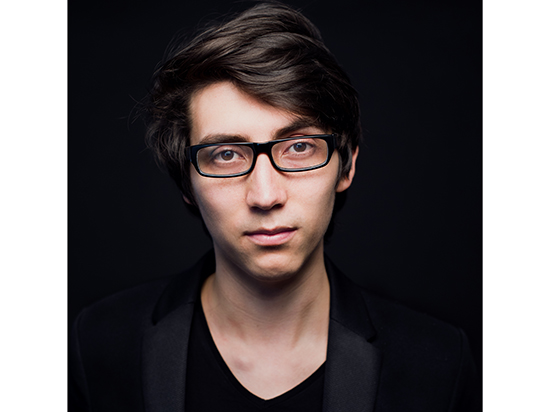 Currently based in New York City, James Diaz is one of Colombia's most promising composers. In 2015, he won the National Prize of Music in Composition from the Colombian Ministry of Culture for Saturn Lights, his concerto for percussion trio and orchestra. The same year, his piece was recorded by conductor Mateo Sepulveda and the REC Symphony, with Diaz as producer.

​Recently, his orchestral work From Infinity was selected for the 2017 Underwood New Music Readings, hosted by the American Composers Orchestra in New York. In addition, his string quartet Infrastructures won second place and honorable mention in the 2017 Manhattan Prize.

Other achievements include a mention of honor from the Premio Latino-Americano de Composição Piero Bastianelli in Brazil, for which he received commission by MAB (Música de Agora na Bahia) and Camará Ensemble; and second place and special mention in the National Prize in Composition 2013 by the Bogotá Philharmonic for his orchestra concerto The Ivory Tower.

In addition, James has been selected three times by the Colombian National Symphonic Music Association in the National Competition for Young Colombian Composers Platform 28, where Mirrors in the Void (2017), Reflections of a Radioactive Sky (2014) and Catarsis (2013) were conducted by Jose Luis Dominguez, Tomasz Golka and Alejandro Posada, respectively. His first orchestral work, REFERENCE, was selected to be premiered in the Reading Sessions of New Colombian Composers conducted by Baldur Brönnimann in 2012.

James studied composition with Moisés Bertrán, Harold Vázquez and Gustavo Parra at the National Conservatory of Music, where he received his Bachelor of Music in Composition, Honor Grade, in 2015. He has attended master classes with composers including Kalevi Aho, John Corigliano, Christopher Rouse, Steven Stucky, Ana Clyne, Cesar Camarero, Aylton Escobar, Flo Menezes and Gustavo Leone. He was a two-time composition fellow at the International Winter Festival of Campos do Jordão - Brazil.

James is currently pursuing an MM in Composition at the Manhattan School of Music, where he is studying composition with Dr. Reiko Fueting. He is sponsored by the Banco de la República de Colombia and is a recipient of the Young Artist Talents Scholarship by ICETEX and the MSM Scholarship.

Featured Work: Mirrors in the Void

Metaphorically speaking, mirrors are related to alternative realities and times. In the composer’s view, these unreal scenarios can be contradictory, behaving and developing independently, but also can coexist in the void. In this piece, different kinds of textures live together within multiple temporalities. Despite their differences of sound and time behavior, these multicolored textures can be listened to as a whole mass of sound, almost like a sonic watercolor painting. 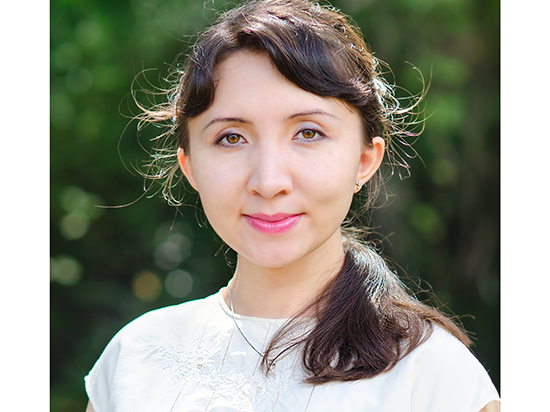 Described as "particularly evocative," "fluid and theatrical...music [that] makes its case with immediacy" (The Arts Fuse), as well as "assertive and steely" and "lovely, subtle writing" (Alan Kozinn, Wall Street Journal), music by award-winning composer and pianist Liliya Ugay has been performed in many countries around the globe. Recipient of the 2016 Charles Ives Scholarship from the American Academy of Arts and Letters and the 2017 Horatio Parker Memorial Prize from the Yale School of Music, Liliya has collaborated with the Albany Symphony, New England Philharmonic, Yale Philharmonia, Raleigh Civic Symphony, Aspen Contemporary Ensemble, Molinari Quartet, Antico Moderno, Omnibus Ensemble and Paul Neubauer, among others.

Born in the USSR in what is now modern-day Uzbekistan and raised in a Russian-Korean musical family, Liliya combines elements of various cultures in her works while prioritizing harmonic clarity, structural complexity and dramatic completeness. One of her strongest passions is the music of repressed composers from the Soviet era: she regularly appears with lecture-recitals on this topic both as a soloist and chamber musician, with guidance from Boris Berman. This year Liliya is organizing the concert series "100 Years: Silenced Music," which marks a century since the Russian Revolution with masterpieces by lesser-known Soviet composers.

In Uzbekistan Liliya graduated from the Uspensky Special Music School for Gifted Children studying piano with Guzal Ardashirova and composition with Polina Medyulyanova and Felix Yanov-Yanovsky. She came to the United States as a Woodruff Scholarship recipient to study piano with Alexander Kobrin and composition with Fred Cohen at Columbus State University. She received an MM in composition at the Yale School of Music and is currently a Doctor of Musical Arts candidate and Teaching Fellow at Yale, where she studies with Aaron Jay Kernis, Martin Bresnick, Christopher Theofanidis and David Lang.

THERE ARE FLOWERS THAT PRESERVE THEIR COLOUR
EVEN AFTER THEY DIE and remembrances sound
from a distance...
...some things are repressed deep, deep inside us
hidden even from ourselves … and like a childhood long since gone
with a single scent they bounce right back to us...
...Then the road appears again to those with no city left to their name
to those who when asked “have you come back?” find no answer, not a sob
not in any language… nothing comes out. Naught…

— excerpts from Mehmet Yashin, Cities We Return To 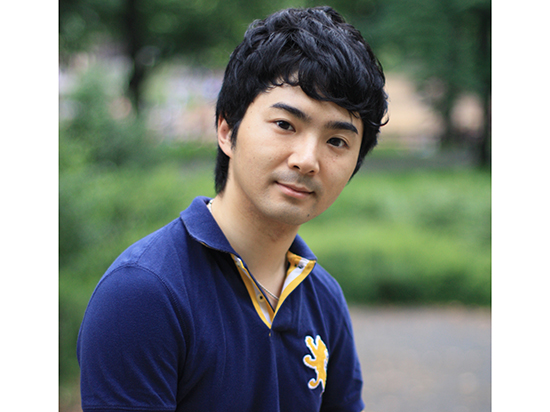 Dr. Shen Yiwen is a Chinese composer, conductor and pianist. His music has been performed on six continents and hailed as “a jaunty, vibrantly scored canvas” and “with a lucid, economical lyricism” by the New York Times. His piano playing has been praised as “deft” by the New York Times and “impeccable” by Seen And Heard International Concert Review. His compositional awards include the ASCAP Morton Gould Young Composers Award, Gena Raps String Quartet Award, Arthur Friedman Prize and first prize from SCI/ASCAP Composition Commission. He is also a winner of the Minnesota Orchestra’s Composer Institute, the Albany Symphony’s Composer to Center Stage Competition, two prizes from Chinese national composition competitions, the Chinese Golden Bell Award and Distinguished Achievement of the Year in Music Composition in Shanghai.

In 2014 and 2015, Yiwen was commissioned by the National Ballet of China for two ballets, Hamlet and Crane Whisperer. The latter was toured by NBC to more than 30 cities in China, with more than 50 performances within the first year of the production, including a presentation at the 11th China Art Festival. Excerpts were showcased on the 2016 New Year's Eve Gala curated by China Central Television. Crane Whisperer received its European premiere in July 2017 in Hamburg, Germany.

His music has also been commissioned and performed by ensembles including Shanghai Opera House Orchestra, Bowling Green Philharmonic, Aeolus String Quartet, Colorado String Quartet, Da Capo Chamber Players, Music from China Ensemble, TALEA Ensemble, Dal Niente Ensemble and the New York Virtuoso Singers, among others. He was invited to be in residence at the artist colony Yaddo and has been a composer-in-residence at the Staunton Music Festival.

Yiwen holds a dual Bachelor's degree in Composition and German Studies from Bard College and its Conservatory, and a Master’s and a Doctoral degree in composition from The Juilliard School. His composition mentors are Joan Tower, George Tsontakis, Samuel Adler and Robert Beaser. He taught at Juilliard from 2011 to 2016. He is currently studying orchestral conducting with James Ross and José-Luis Novo at University of Maryland while serving as co-director and conductor of the school’s Repertoire Orchestra and assistant conductor of the Symphony Orchestra. For the past three summers, he has attended the Pierre Monteux School and Summer Music Festival, where he has studied conducting with Michael Jinbo.

Reminiscence and Oblivion is dedicated to my aunt, Weijie Song, who died in March 2013 of at the age of 46. At that time, I just started composing this orchestral work, and out of grief, I decided to include an elegy movement to mourn for her untimely death. The first movement, Intrada, serves as an introduction to the whole work. The second movement, Burlesque, attempts to mix up some musical traditions that one remembers from the past, such as march, waltz, country dance, choral, etc.

The last movement, Elegy, incorporates three quotations. The first comes from a traditional Chinese folk song in which a child mourns for the death of her mother, and the second line is taken from a song I wrote previously, which reads, “Here we part, friend; Once and forever.” At the end of this movement, I integrated a quotation from Richard Clayderman’s Souvenirs D’enfance, a little piano piece that I used to teach my aunt to play. We remember those we have lost.