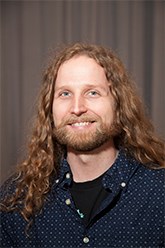 A musician from the age of 7, Mark Dahlen played several instruments and performed in bands and choirs throughout his school years. He began working in recording studios in high school and went on to graduate from McNally Smith College of Music. After a few years in the industry in his hometown scene of Minneapolis, Mark moved to Nashville. Working for production companies, he made his way into touring. He spent the better part of the next 10 years traveling the world as a tour manager and engineer for multi-Platinum, Grammy Award-winning artists. He came to the Symphony in 2010.

An avid reader, truth seeker and permaculture enthusiast, Mark spends time creating a positive space in the universe and continues to write and record his own compositions.