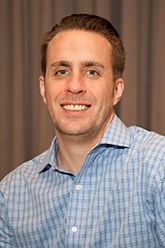 Dave Felipe joined the Nashville Symphony as publicist in February 2014. A native of New Jersey, Dave began his professional career at the U.S. Chamber of Commerce in Washington, D.C., starting out in labor policy before spending seven years in the organization’s media relations office. In 2007, he left Washington for New York City and spent time as a marketing and communications consultant for a variety of small businesses, artists, and entrepreneurs from around the country prior to becoming the director of communications at SortPrice.com. After relocating to Nashville with his wife, dog, and two cats in early 2013, Dave spent six months working as the interim communications coordinator at Hands On Nashville and discovered a passion for nonprofit work. He is an avid musician and singer/songwriter with two albums to his name, and enjoys reading, history, politics, travelling, and cooking.