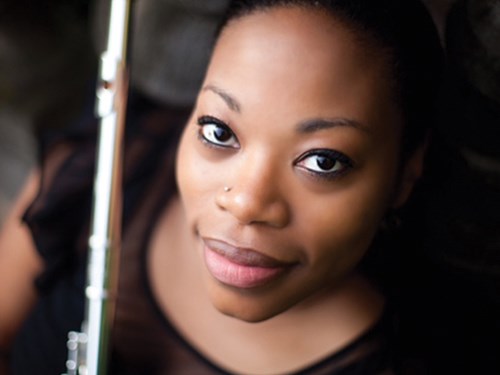 Ebonee Thomas is currently holds  the Second Flute/Piccolo with The Dallas Opera  She holds degrees from Southern Methodist University and the New England Conservatory of Music. She was previously Principal Flute of the Knoxville Symphony and has held positions in the Florida Grand Opera and Houston Symphony. Ebonee completed a fellowship with the prestigious New World Symphony under the direction of Michael Tilson-Thomas where she performed the North American premiere of Christian Lindberg's flute concerto, The World of Montuagretta. She also performed John Adams' Chamber Symphony in Carnegie Hall under the composer's baton. Ebonee was principal flute for the Star Wars: In Concert! orchestra during their U.S., Canada, and Mexico tour. She also performed as Principal flute in The Gershwin's Porgy and Bess: A Broadway Musical with the American Repertory Theatre in Cambridge, Massachusetts. She has performed with the Los Angeles Philharmonic, Detroit Symphony, Seattle Symphony and the Santa Fe Opera. Locally, she performs regularly with the Dallas and Fort Worth symphonies. She spends her summer as Second Flute/Piccolo with the Central City Opera. In addition to performing, Ebonee serves on the board of Greater Dallas Youth Orchestras and is a faculty member at Brookhaven College.